In May 2018, Anomaly launched their creative platform for T-Mobile called “A World of Screens”. From that moment on, all T-Mobile advertising, from TVCs to OOH, from social media to banners, had to feature lots and lots of screens.

For the end of the year, Anomaly was tasked to develop a special sales campaign, that deserved it’s own distinguishable style. Anomaly wanted to put the emphasis on the emergency of subscribing to Unlimited by showing the hero, rushing throughout thousands of phones, falling like dominoes, to get to the final destination: a T-Mobile store, set in a hyper-realistic environment. The campaign would be the perfect occasion to extend the World of Screens into a hyper-realistic “sales campaign” environment. 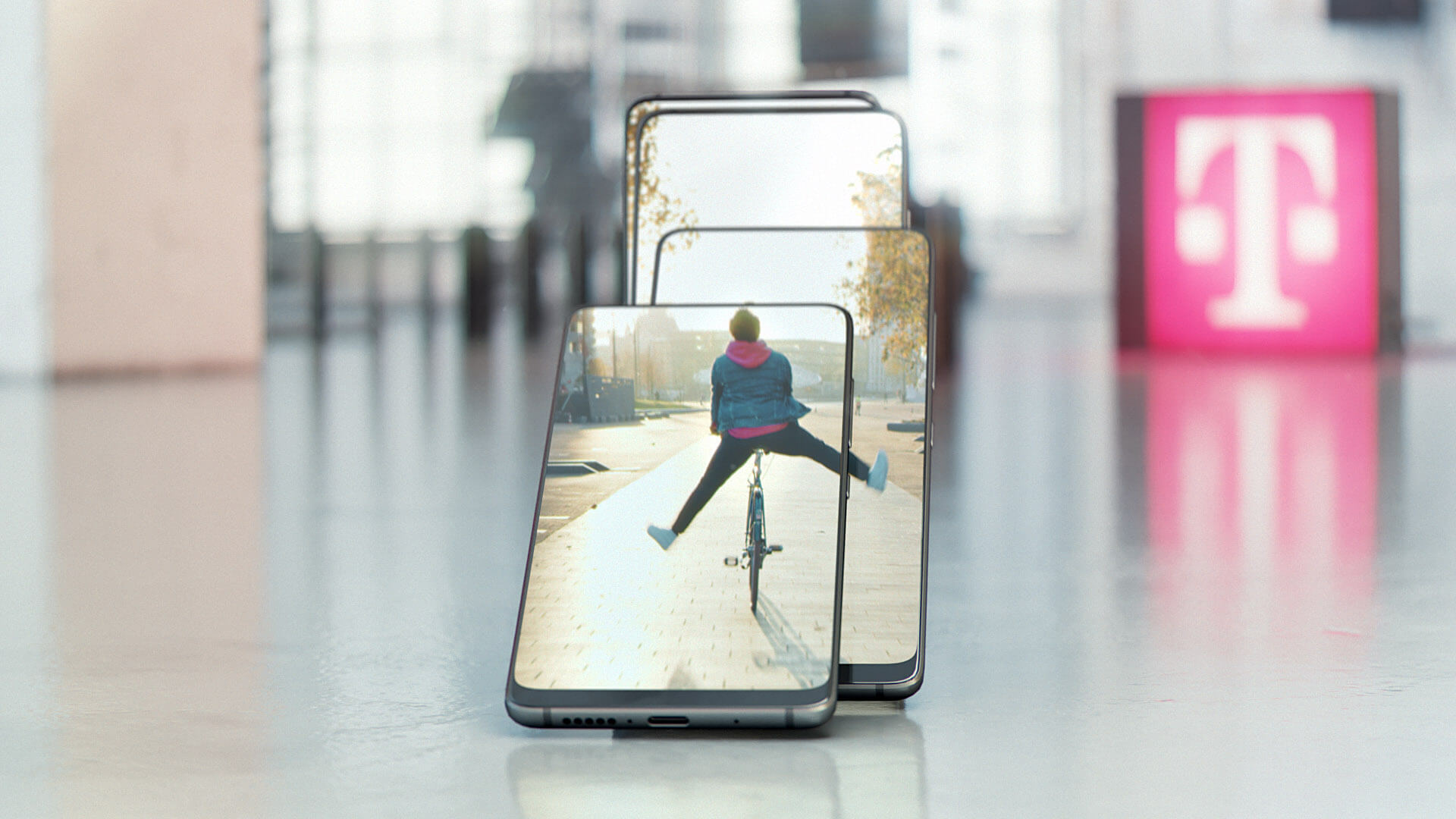 TV-spot for a T-Mobile campaign, featuring complex combination of simulated (like dominoes) smartphones combined with live-action on the displays, all in perfect sync.

We designed an elaborate setup of rows upon rows of CG smartphones, all falling and connecting like dominos. On the screens the hero would preform a sequence of actions shots, all perfectly in sync with the falling domino rows. The smartphone domino setup would be CG, and the action on the screens needed to be Live-Action. We wanted to make it so that all the action would seem as if it was set-up by hand by actual people, and the end result shot in camera for real.

Only Design/CG/VFX side of production. All live-action production was taken care of by Bastiaan Mast.

— Managing ballpark, treatment and the pitch (which we won)

— Client point of contact for all production and financial needs

— Scoping, budgeting, planning, and scheduling all milestones/reviews with client

— Clear communication between all stakeholders and personnel

(taken from the Colorbleed site)

A major part of this production was building a believable world. Together with Anomaly we designed a digital studio warehouse as a shooting location, complete with all the objects and details you’d expect in an actual studio where people live/work. We took special care to make it all as believable as possible, with details like cables taped to the ground and little mistakes and imperfections like blemishes on objects and creases in fabric.

We timed the camera with the dominos in such a way that a real cameraman could move with a real-life speed over the same set. Once we had that straight we shot our own “fake cameraman” against greenscreen to capture the reflections of a cameraman walking with a camera in the computer-generated content – you can see him in the laptop’s screen reflection. Additionally we used the same cameraman stand-in to cast believable shadows over the domino action as we move around.

Before shooting the complex shots we did a thorough timed previsualization of the action, including height and camera distance to actor information overlays. This included timing the actor’s actions as well as the camera. We used this to time the acting on set as we drove with a Russian Arm through Rotterdam city center and acted out the same camera motions as we did in previz (to match the camera motion in the CG domino world)

We built a custom tool in Houdini that would allow us to direct the domino trail simulation easily. Connected with Houdini Engine another artist would then be able to quickly adapt the previz/animation in Maya, even in very late stages. A great feature was that the artist could stay on a specific frame and change the path to directly see where the dominos would be falling on that frame. This really allowed for quick decision making and a lot of simple iterations.

Additionally we did a custom setup that would allow different frame offsets for the footage per phone and make them appear static (like a hold) when we were about to pass the fallen phones with the camera.
This was done to get the audience focus where we wanted them too. In Houdini we built a tool that would offset the UVs over UDIM tiles.

The footage wasn’t just displayed on the phones but projected from a specific angle to tweak and direct the readability from the camera’s point of view.
This was previzzed in Maya and then we transferred Maya’s `place2DTexture` offsets and camera projections to Houdini nodes to perform the final tweaks (on holds and frame randomizations) there for total control.

From the start we knew this would become a technical live-action shoot as we needed to synchronize camera movements closely with our timed previz as we followed our moving actor.

‍
Knowing this made our live action partner, Gardner Gallops, an easy choice as they know how to handle this and really aid in setting up a strategic shoot.

After weeks of preparation, pre-visualization, and shooting of footage… all the materials: CG & live-action fit together.
After lots of compositing, some tweaking, some dirty trickery, and final color-grading for TV, we delivered our TVC to our agency and client, just in time for the holidays. 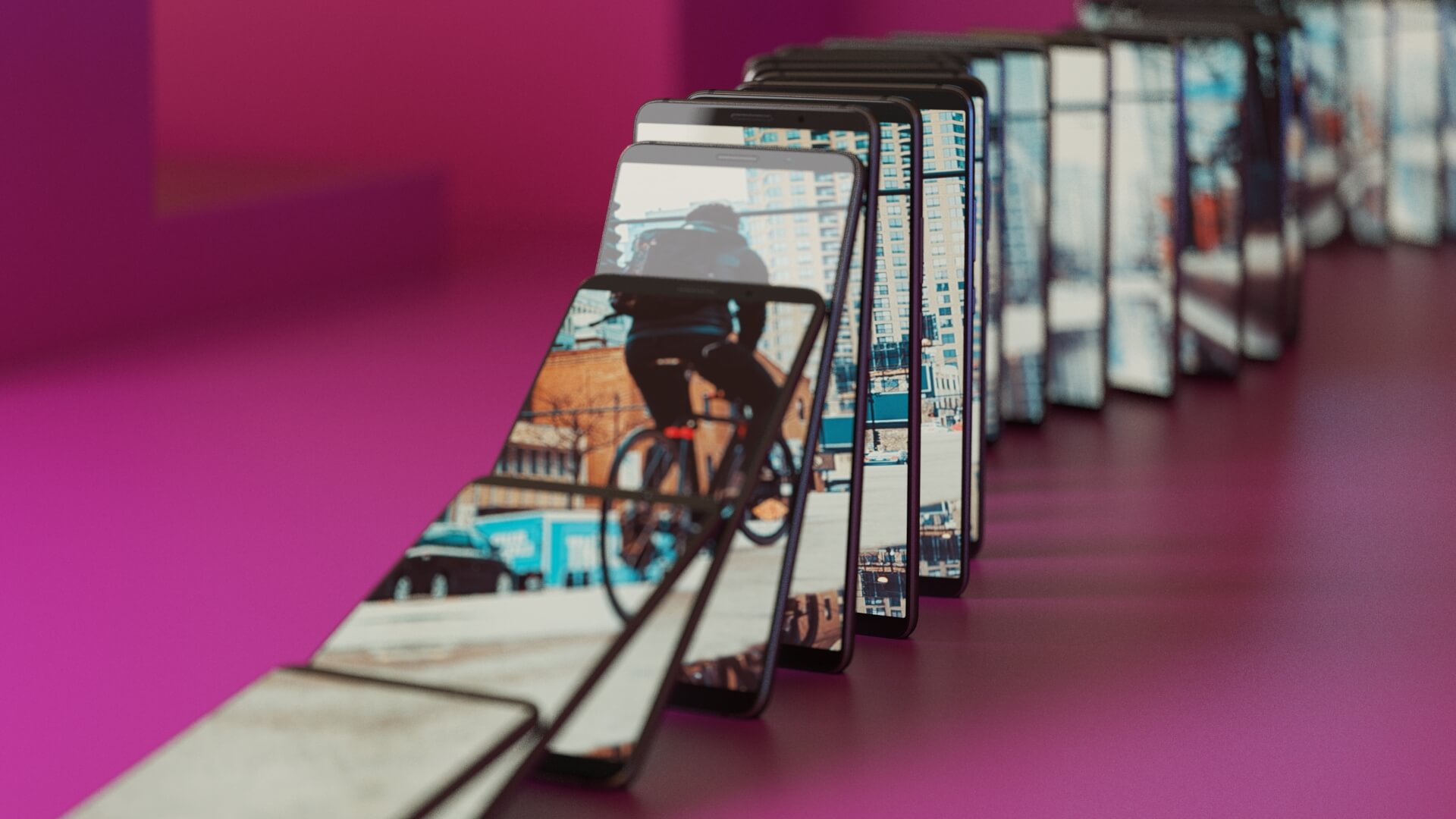 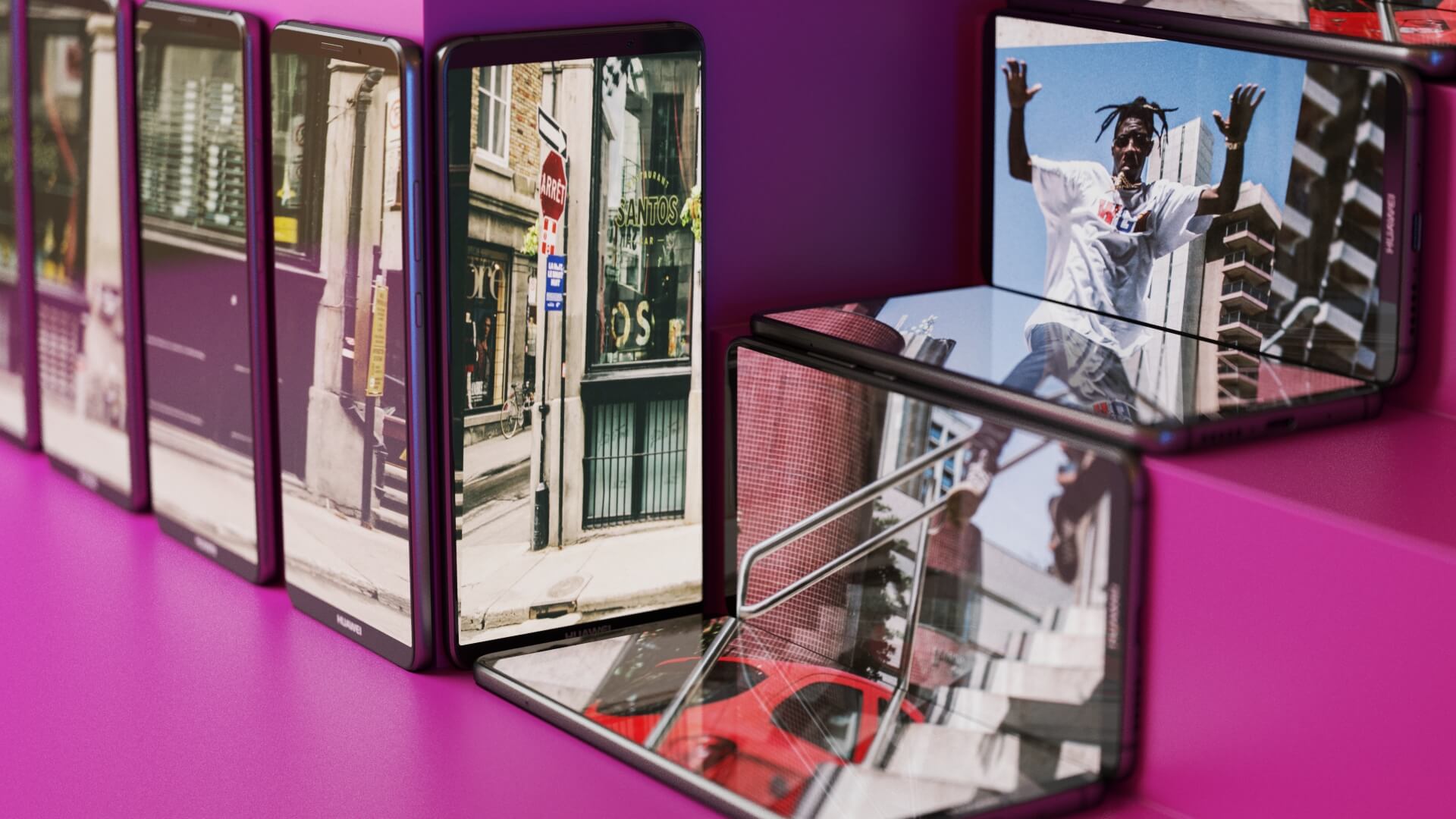 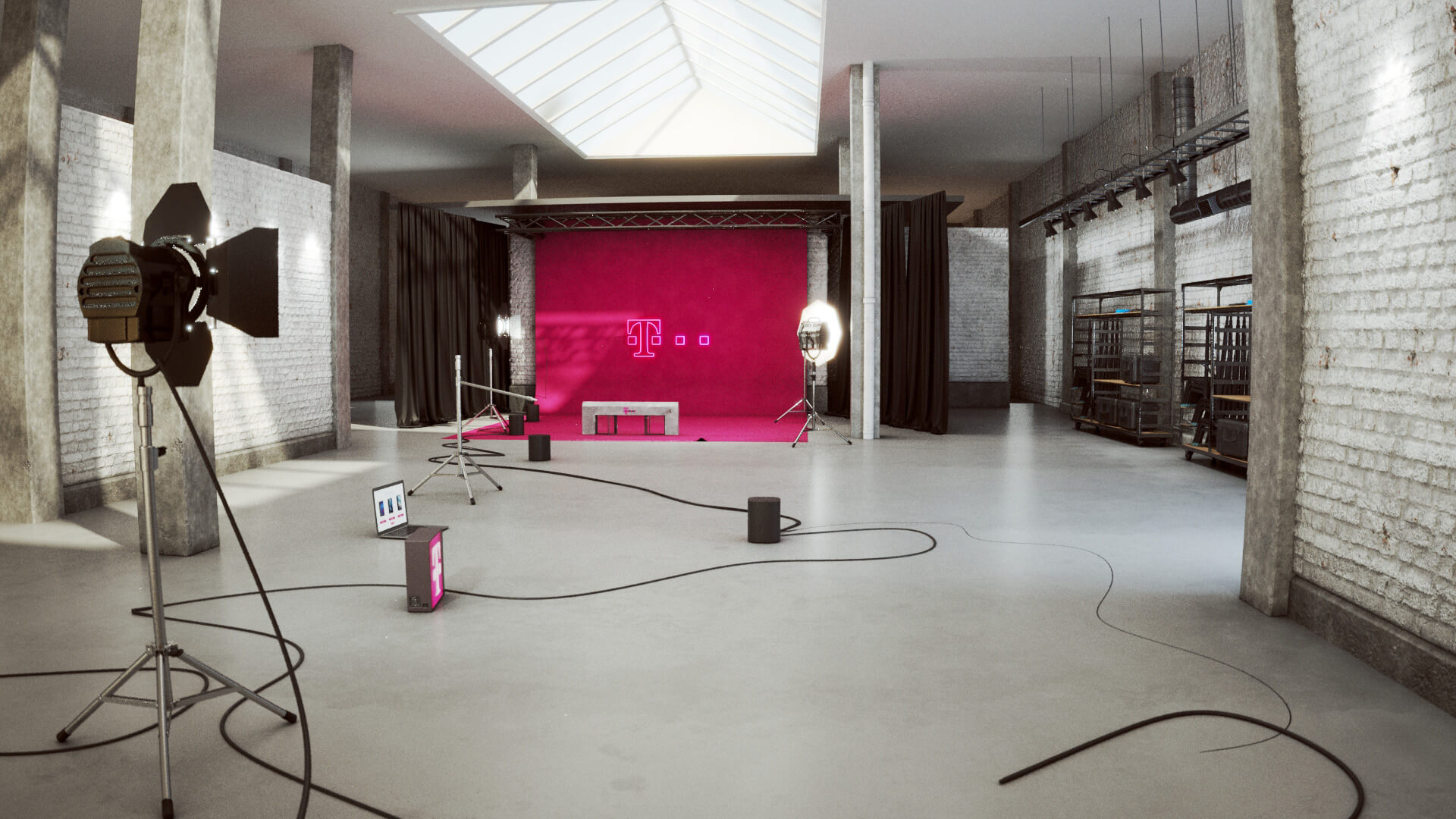 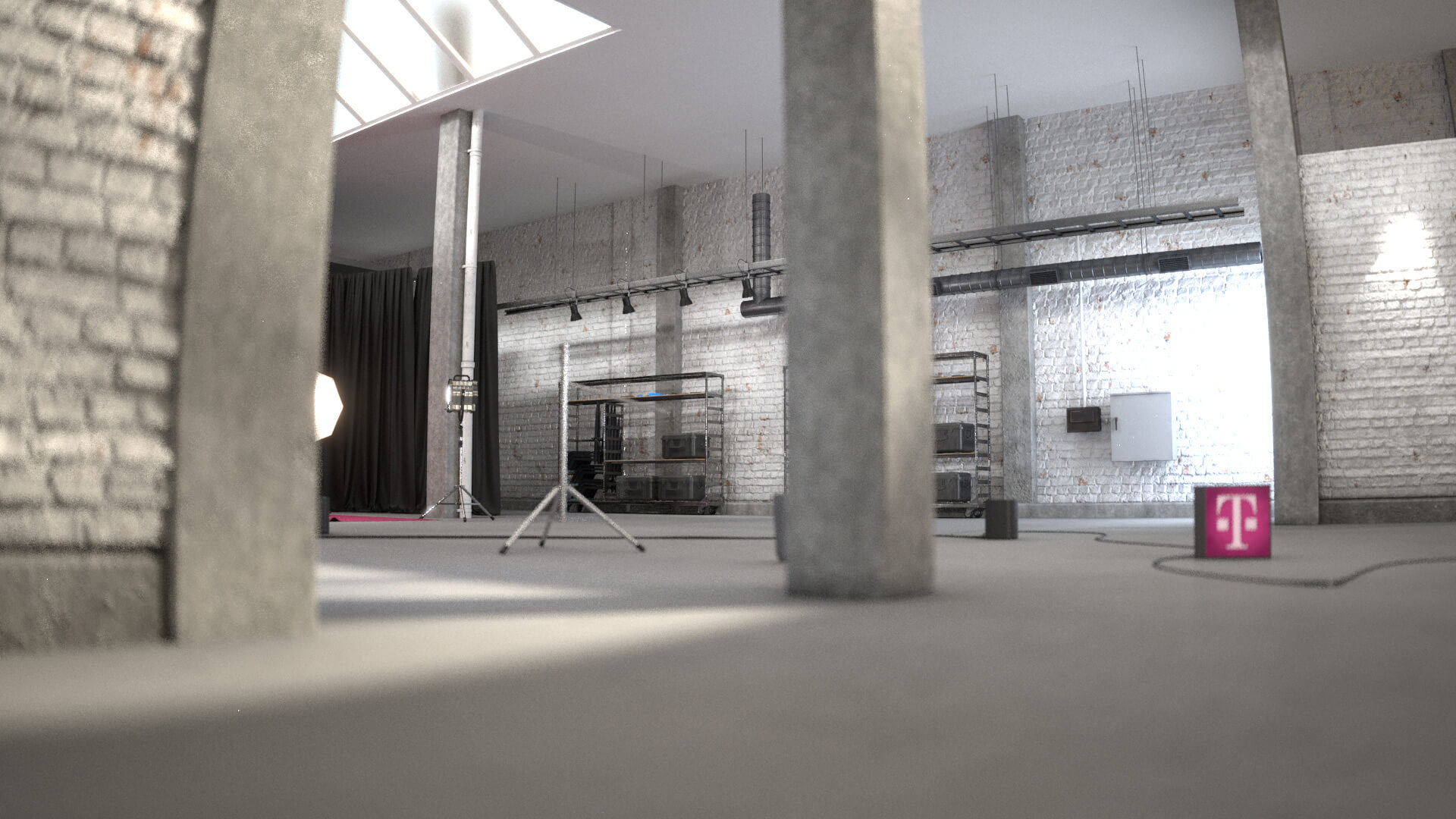 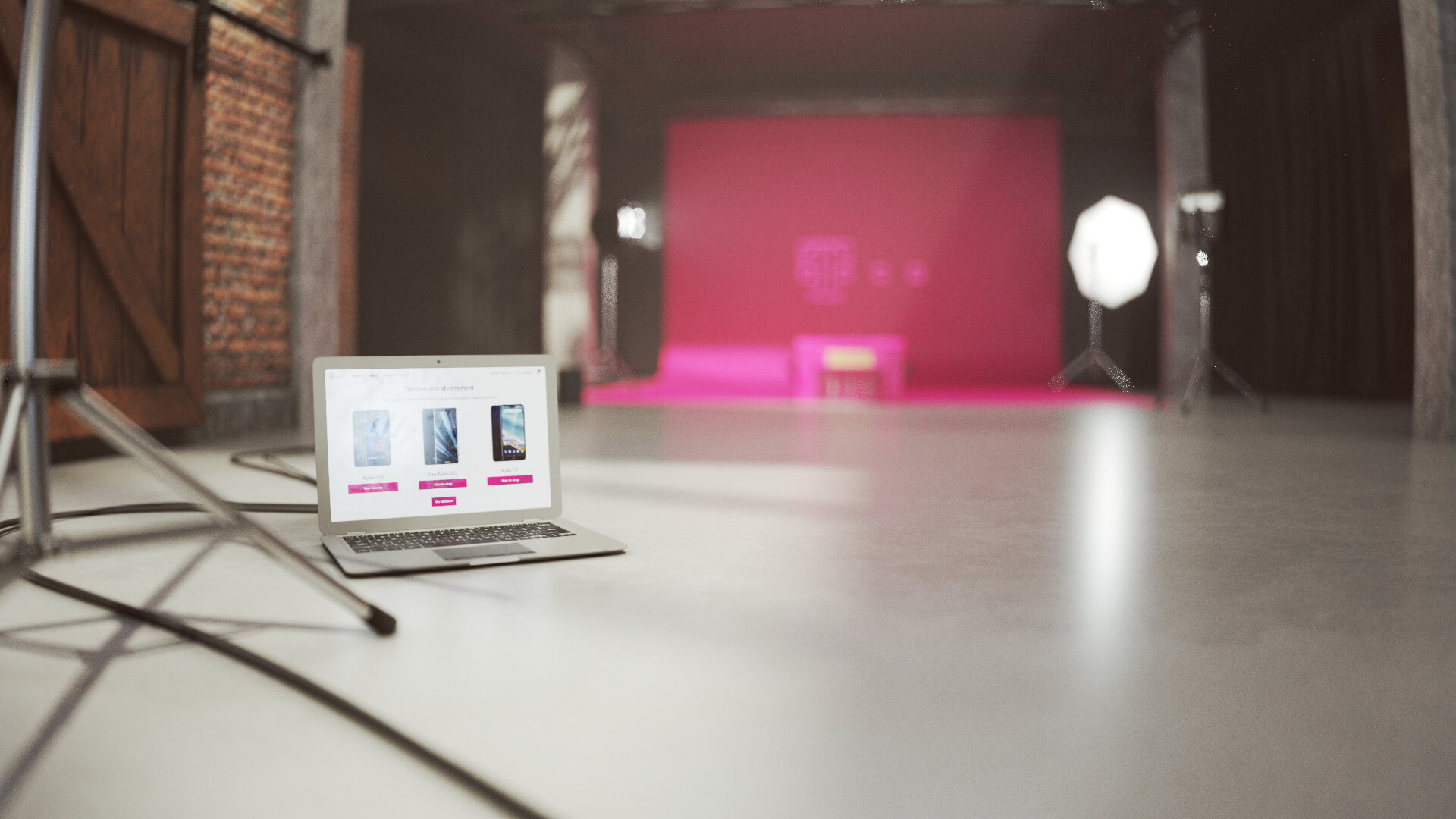 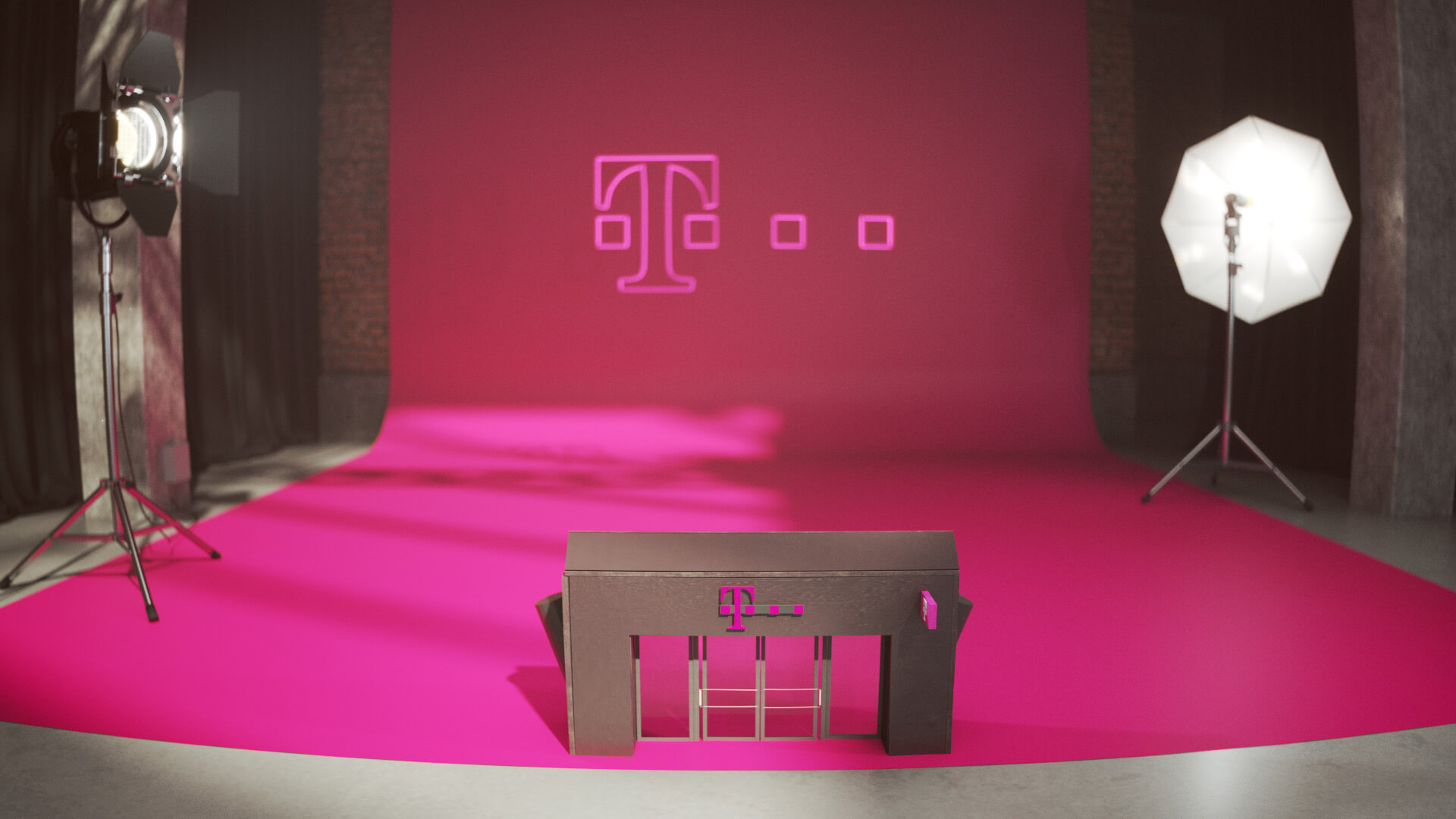 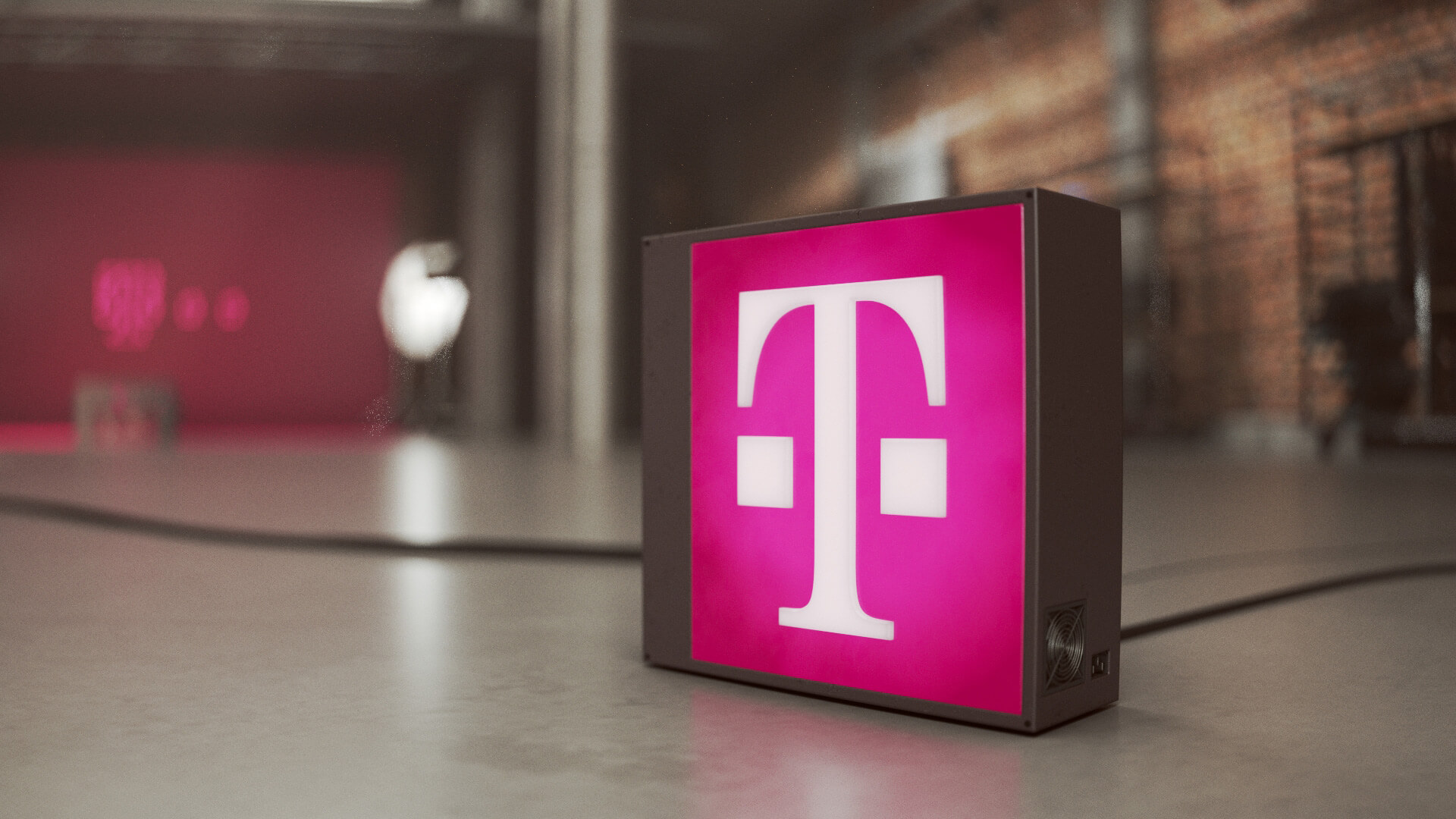 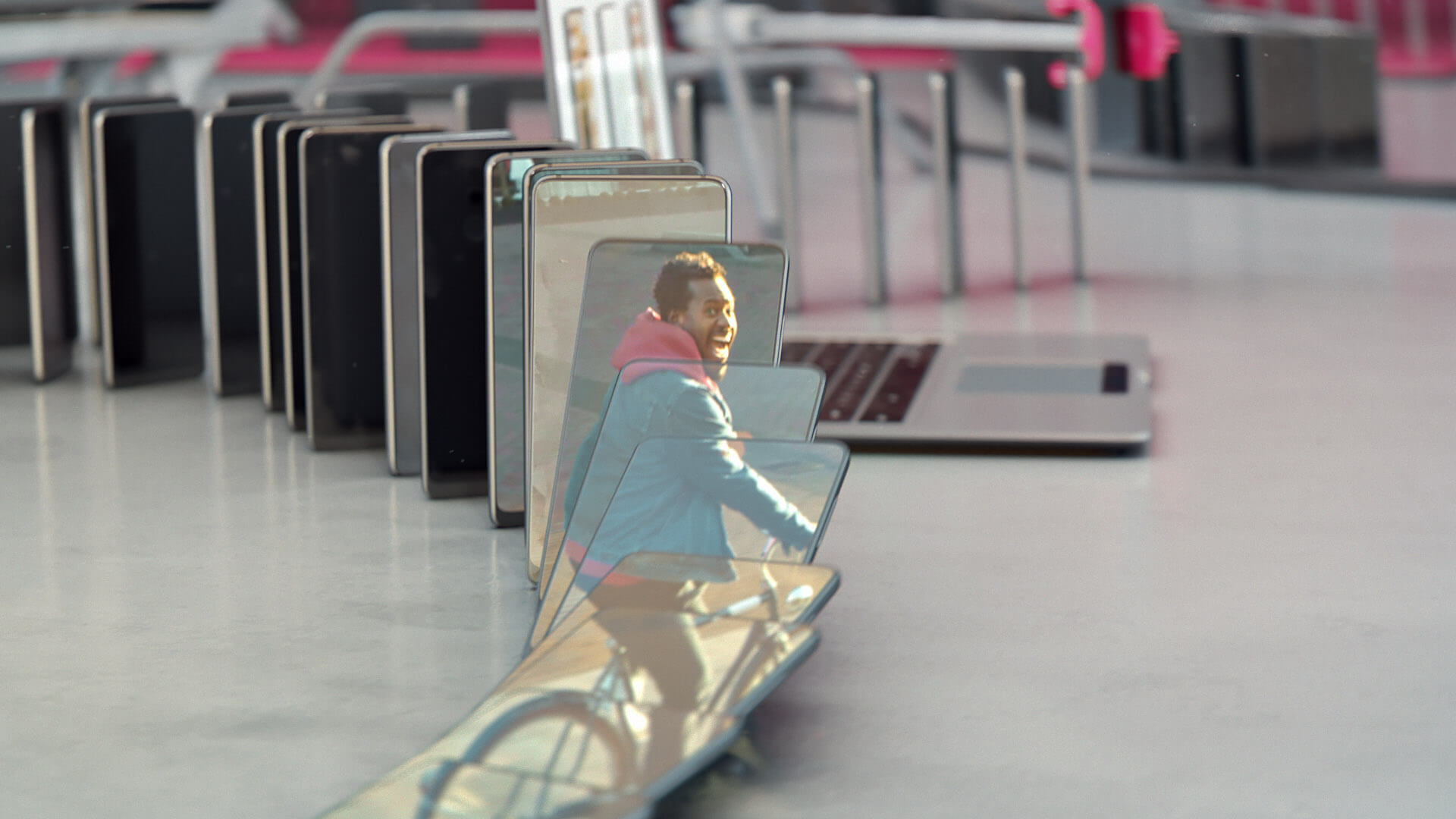 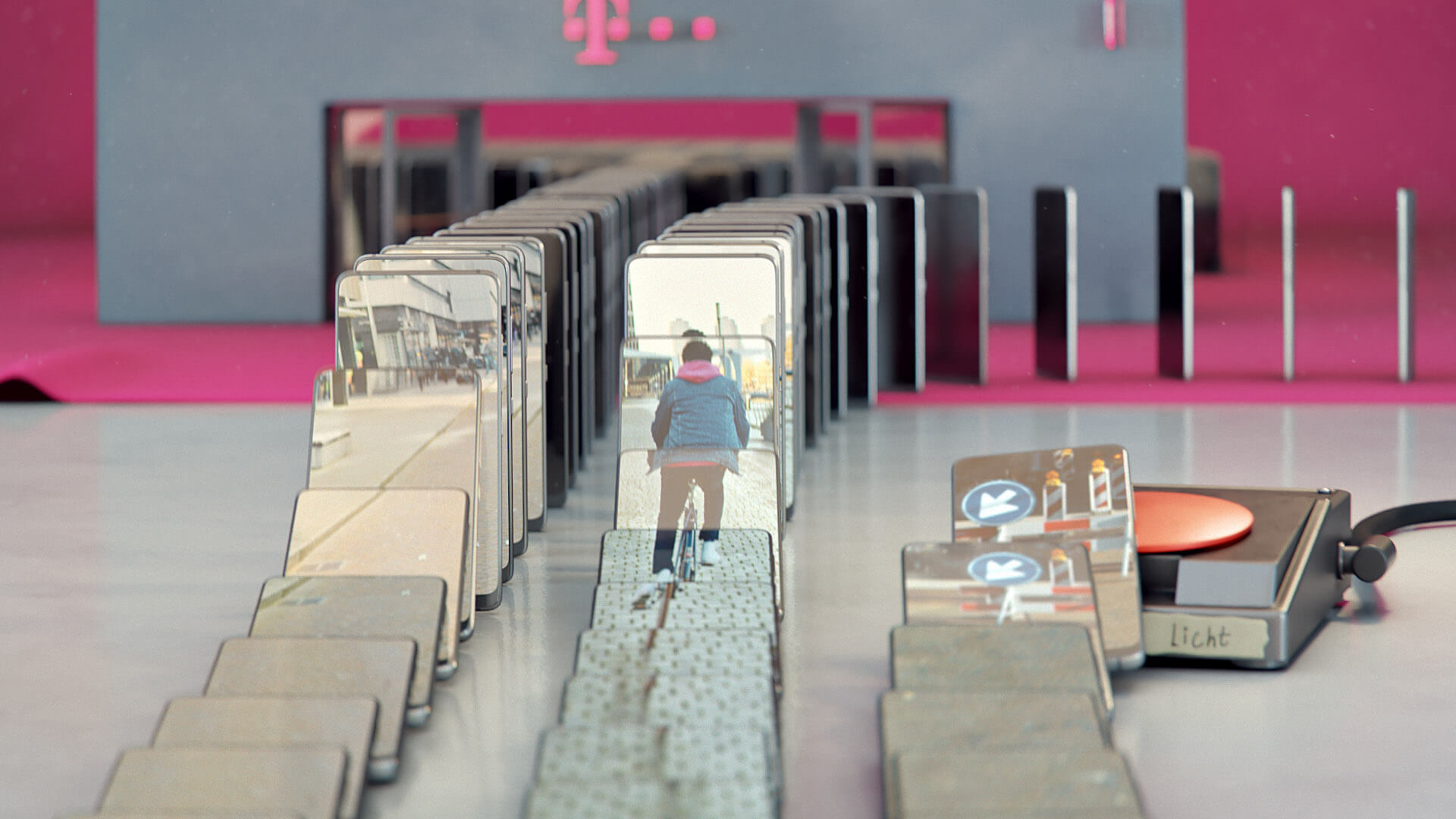 WHERE TO GO FROM HERE